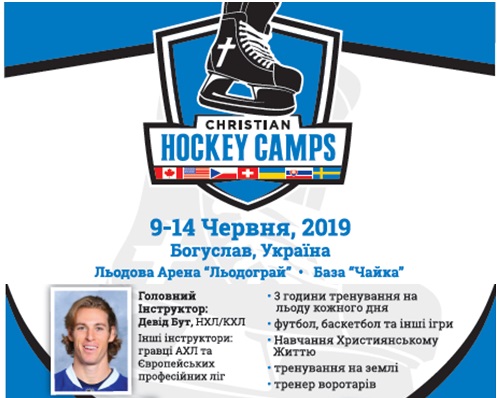 June 9-14, 2019, young hockey players were trained by the instructors who are NHL, AHL players and who are from European professional leagues

In the beginning of June, players from the NHL, AHL and European professional leagues trained at the Bohuslav Ice Arena. 50 young hockey players aged 7 to 16 came to Bohuslav. The children were divided into two age groups which were for younger and older ones. There were two training sessions on ice for one and a half hours in each group every day and a training session on the ground in the Chaika children’s camp, where the coaches and young athletes lived.

It should be noted that the hockey players’ families paid only for accommodation and meals. The rest of the cost for the organization of the hockey camp was assumed by the Christian Hockey Association (Canada). Trainers and instructors are volunteers.

My granny is Ukrainian; she is 98 years old. She lives in Canada, and I saw her two weeks ago. She told me that her parents lived near Kyiv on a small land, small farm, so I was excited to come to Ukraine, because my grandmother is Ukrainian.

We love it here. We are all enjoyed Chaika. We really enjoyed our time there. It’s beautiful setting on the river and it’s close to the ice rink which makes it very convenient.

I would just say that hockey is a great sport that can take your place in life, give your opportunities in life.

No matter where are you playing now. If you keep perusing your dream, working hard at your dream. You can take your places. So, keep playing! Keep playing again!”

David Booth is a hockey instructor at the camp told us: “I started hockey when I was three years old. I am 34 now so I am playing for over 30 years. Hockey is my life. I think my life is pretty boring to the game of hockey. So, it’s pretty much my life for the last thirty years!

This organization [Christian Hockey Organization is from the editor], is just probably the best job for a summer hockey camp which I ever seen. I think they not only influence hockey which they have great skills sense that I teach and also do the most important thing in life. The Christian Hockey Organization answers question: “What is a purpose of your life”? So, kids come here having a great time with hockey but they also learning the most fundamental basis of life.

I am doing pretty much the same thing I do when I’m training kids in the United Sates. I think the skill levels are very similar. You know, I have not turn down. The kids were just as good which was great to see. So, I am able to do the same drills I am doing with some of the best players in the United States. So, that was very encouraging. But I mean this kids are best. They are sharp and it was fun to work with them.

Ukraine is a new country for me. I think the drive from Kyiv to here was beautiful and reminds me home where I am from Michigan. How we get Chaika [camp is from the editor] there are the flowers, the pine trees the river. That’s actually spectacular and a very nice place there.

I am surprised just how great it is here [at the Liodohrai UETC is from the editor]. There is a great ice rink, great facilities. Having, you know, just these types of facilities where the kids can skate any year on ice. Having ice in June it’s spectacular!

I’ve got an experience on this ice of my second year here in Ukraine. It’s just the welcome attitude that the Ukrainian people are given me in my life. Our camp and they were so graces to us. They had a great host that we feel that the whole country embraced us which is better awesome.

I think the kids had to keep playing hockey. I think they are good young kids here in the hockey area. I think we should stress it over and over. Kids have to keep working hard and they can make something with it. You know, whether It is a hockey or just a workman tell you working hard and making something in your life. It’s just something that I really hope to see these kids in a few years doing something special in their lives.”

Mykyta Smirnov is a hockey instructor at the camp who was born, spent his childhood and began playing hockey in Kharkiv city told us:

“I had the opportunity to go to the United States. I studied there, played for the Junior League. Then I began studying at the university and playing in the University League. Then I met the guys from this program Christian hockey camps. I was offered, and I agreed with pleasure to go help with the organization, with the translation on the ice.

I’ve played a lot. I’ve traveled to different rinks, to different places in America and in Ukraine, in different countries and here this rink [the Liodohrai UETC is from the editor] is in a very good level. There is a good quality ice, the locker rooms are also good. The guys are sitting in the changing- clothes room, there is enough space for everyone, we can even keep our uniform overnight. It is even hard to imagine in other places.

I am studying and playing in America now, but my heart belongs to Ukraine. Hockey is a very big game in my life. Thanks to hockey, I achieved what I could not even imagine that I would ever achieve. Hockey helps me to reveal my potential.

And for younger kids who only want to come to hockey and develop physically. It is a very good kind of sport. Moreover, you have such opportunities: such ice skating rink, such a base. All required conditions for training. For the development of Ukrainian hockey.”

We also talked with the hockey players who had been training at the Christian Hockey Camp.

Mykhailo Ptashkin, who plays in the Sparta kids hockey team (from Lutsk city, Ukraine) told us: “We get up at 7:30 am, go to have breakfast. Then go to the ground training. We are doing different stretches there, warming up. We go to the hotel, change clothes, wash and drive to the arena. Training classes begin at 10:15 am. We start with ice skating first and then we are stationed according to groups. Our coach shows what exercises we need to do and we do them. The goalkeepers were trained to throw. I like ice skating most of all.

This Liodohrai I like more. Truly speaking it is better than in Lutsk city.”

Oleh Palamarchuk, who is 16, he plays in the Soskovets city (Poland) told us: “The impressions are great, the trainings are difficult. I took a lot. I improved my ice skating. There was a time to relax after the evening trainings we came back to our houses and went to play football with friends.

I was born in Ivano-Frankivsk city(Ukraine). I am in Poland for three years. I play in the contract.”

Mykyta Moiseev, who is 16, he plays for the Streltsy team (Czech Republic) told us: “I really like this camp because the coaches are very good. The trainings are very high-quality which are on the ground and on the ice.

I was born in Ukraine. I’ve been playing in Czech Republic for two years already.”

Oleksandr Matviychuk, who is a Ukrainian hockey player, a coach, a founder of the Bohuslav Hockey School tells us, that it is very important the other professional coaches were involved in the training process of any team. The new coaches always expand the horizons of the hockey players through exercises, ice skating.

Two instructors who are leading the main part of the work in this camp now. They are active athletes who are high-level professionals and they can not only tell the theory, but also demonstrate a complex of things that are not given to every coach. Also, he noticed a high level of a goalkeepers’ instructor work, mostly as a coach, that is particular important in the situation when such specialists are not enough in our country, when most our goalkeepers do not have separate coaches.

Oleksandr Matviychuk told us that the training program of the camp was adapted to the form and the term, to the age of athletes, and said that in the Liodohrai UETC, working with the Shershni children’s hockey team, coaches have used the techniques of the North American coaching school long before, because their programs have been tested by the experience and are developed according to the age-related changes of athletes connected with their development.

In North America, coaches do not face many problems that Ukrainian coaches can have. After all, there is a free program there, where every training is developed in minutes, there are seminars, lectures for coaches. The task of coaches is to understand when to apply a certain training, certain techniques that are needed at a particular stage: competitive, preparatory or rehabilitation training.