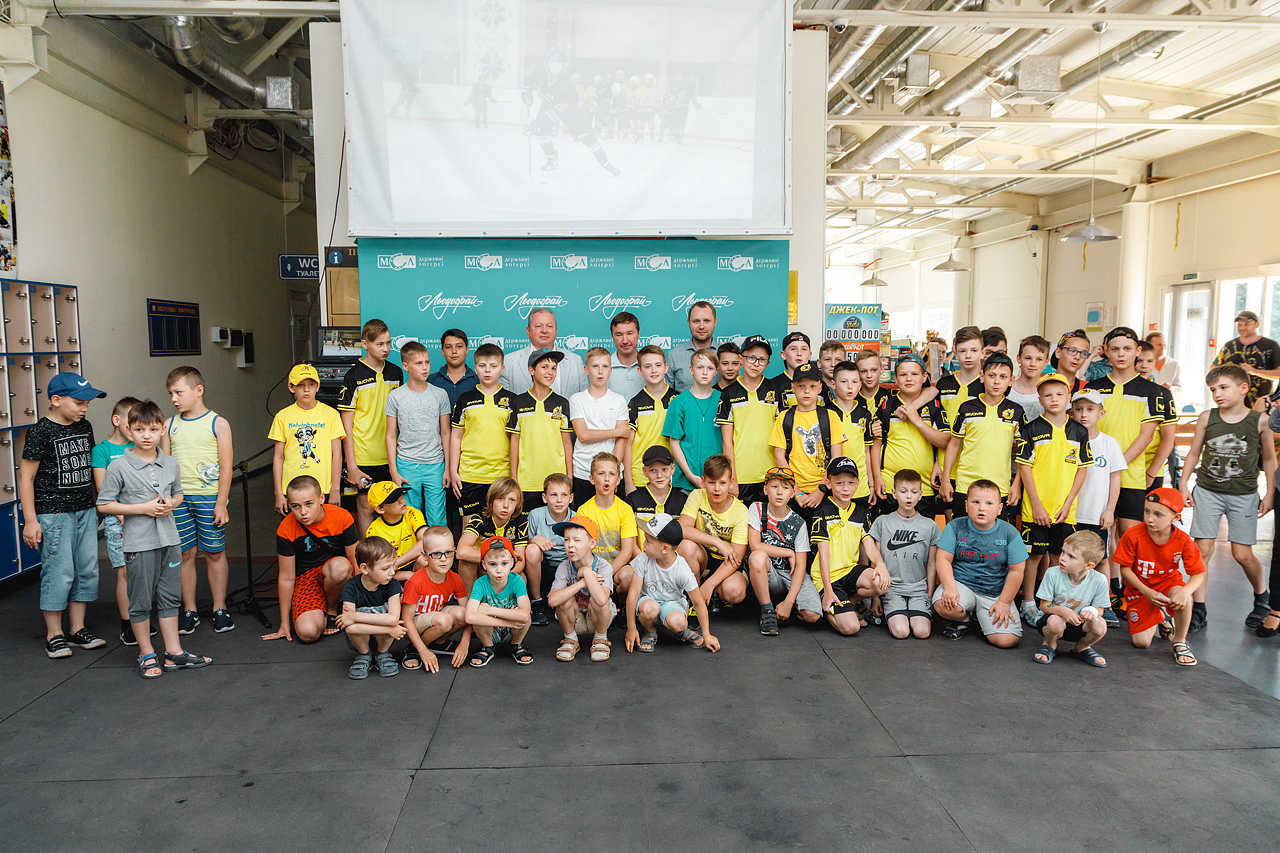 On June 6, 2019, young hockey players were thankful to Oleksandr Matviychuk for organizing of the ice hockey school in Bohuslav

Ice hockey is one of the best sports games. It is dynamic, fast, gambling. Hockey is a life for athletes and an exciting performance for spectators. A hockey helps players to become strong, smart, enduring, decisive, disciplined. And also hockey is self-control, wit, ability to think on the site, the art of predicting actions and outwitting the opponent.

Since the opening of the Liodohrai educational training center (November 6, 2014), a hockey school started to work in Bohuslav, whose head coach, and in fact who is the founder of the Bohuslav professional hockey, became Oleksandr Matviychuk, who is a world level Ukrainian hockey player, a champion of Ukraine, Ukrainian Cup winner, World Cup winner and Best Attacker Cup.Oleksandr has played for the Ukrainian national team for 10 years, for 5 years in Russia, played for North America for three years, participated in 9 world championships, in the qualifying games of the Winter Olympics in Salt Lake City (playing for the team in the main tournament prevented the injury). About him wrote: “He is swift, maneuverable, perfectly owns dribbling,” “Mr. Clever Hand”.

Heorhii Lozhenko, who is the MSL President, on his Facebook page told us:

“Five years ago, Oleksandr Matviychuk and me united in the idea of ​organizing an ice hockey school in Bohuslav.”

From the very beginning, Oleksandr showed himself to me as a person with confident voice, calm and logical in his judgments. With sparkling eyes, which reflect the purpose and philosophy of the winner.

Together, we were looking for helmets, skates, clubs, nets for babies and the first uniform, but also for different colors. It was so interesting, exciting and excited to watch with Sasha how little boys turn into real champions.

Today I can be thankful to say that Oleksandr Matviychuk is an organizer of the Bohuslav ice hockey school which is called “Liodohrai”. He is a coach and teacher but also a strong and persistent person.

Oleksandr Matviychuk told us about the beginning of his work as a coach at the Liodohrai UETC: “It is a kind of challenge for me. I like working hard here.

In Ukrainian ice hockey today only the kid’s coaches work. For me, my coaches have done a lot, now it is my turn. ”

During the four seasons, the Liodohrai pupils developed and gained experience together with him, and the coaches’ staff was expended with energetic and talented coaches.

Having organized the ice hockey school in Bohuslav and the children’s team which is able to compete with the teams of the leading Ukrainian hockey clubs, Oleksandr Matviychuk changes his direction of life, goes back to Kyiv to his family, transferring the management of the ice hockey school to a new head coach, who isn’t a new person at Liodohrai, this is Oleksandr Yakovenko, who is a six-time Champion of Ukraine, a two-time champion of the East European Hockey League, a Ukrainian Cup winner, a talented coach who works effectively with Shershni team during the last three seasons.

On June 6, 2019, young hockey players were able to thank Oleksandr Matviychuk for organizing the ice hockey school in Bohuslav for an invaluable contribution to the formation of the Shershni hockey team, for gaining his sports and life experience, for hockey achievements and personal development, and expressing our wishes for our favorite coach and a wise mentor.

And in the history of the educational training center, a new stage of development begins, the coaching staff of the ice hockey school in the new 2019-2020 season is going to be extended and strengthen, the Liodohrai coaches and pupils will continue to set ambitious goals for themselves and reach the most difficult goals with perseverance.

Not all Liodohrai pupils will become professional hockey players, but sports years will not go away. A hockey will teach you to overcome difficulties, to know the joy of winning and to endure losing, to help you find real friends, to learn to live and work in a team, to save your health for many years, to help you live an interesting and worthy life, to become an honest, sincere person with strong spirit!

We also wish young Liodohrai athletes and coaches success on the sports and life ways!